The Sword of Damocles

Recently beating cancer, David Downs enjoys life and puts any worry of its return to the sword. 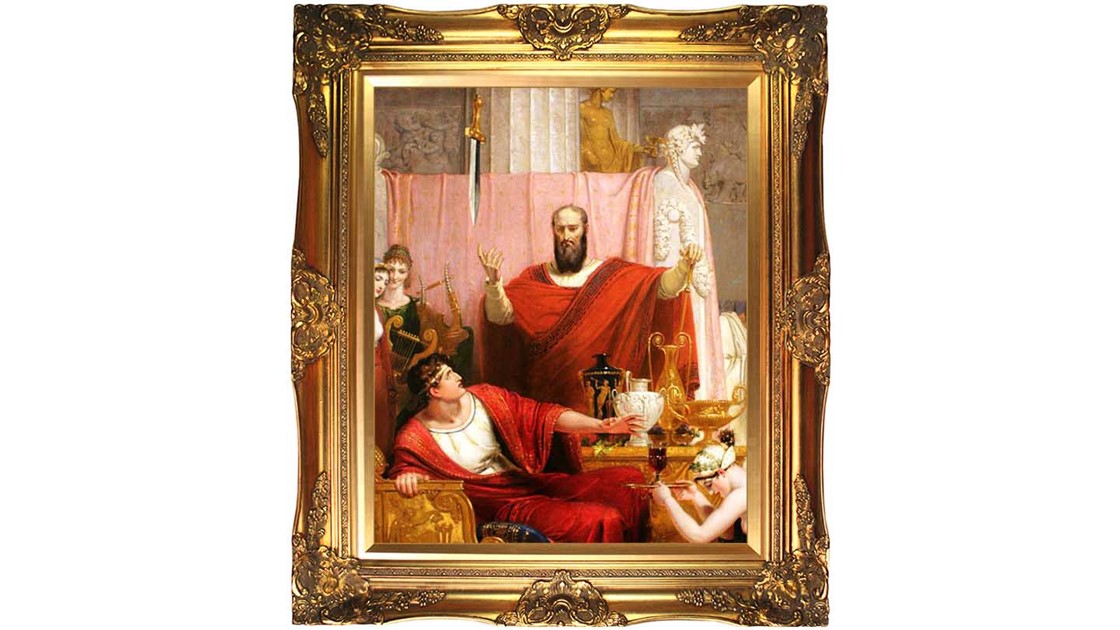 Legend had it that ancient Greek Damocles was so happy that, to show him humility, he was seated at a banquet under a sword which was suspended by a single thread of hair. The implication being that even in our happiest hours, a giant sword could fall on us at any time and give us a pretty severe haircut.

What a crappy legend.

That metaphorical sword hangs above many people who have recovered from serious illnesses, and – like many things in life – worrying about it won’t do any good. Quite the opposite, the sword of Damocles means that rather than enjoying life, you worry about what might happen if the illness returns.

I’ve recently had a second chance at life, recovering from terminal cancer. My story is convoluted, but the short version is this. In January 2017 I got a mild case of the flu. At least, that’s what I thought I had.

It wasn’t the full-on ‘proper’ flu, and not nearly as bad as the worst of all illnesses, the ‘man-flu’, but a mild flu. Nothing to get too concerned about really. Like most men, I kind of ignored being ill for as long as I could.

In fact, probably quite a lot longer than I should. 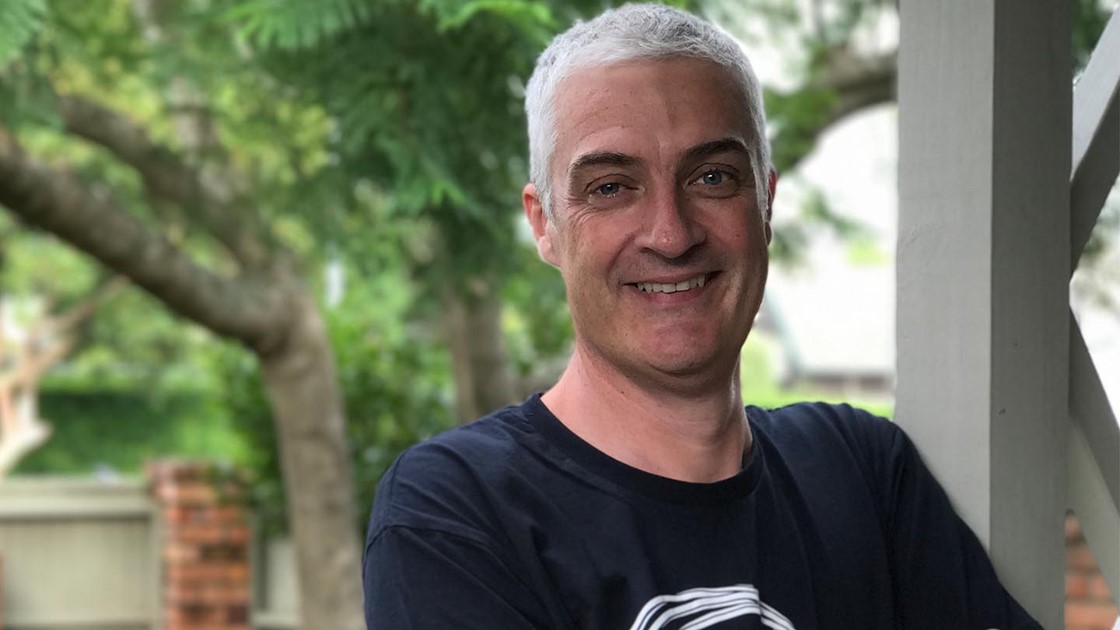 Indeed, it wasn’t until my wife basically booked the doctor’s appointment, and forced me to drive to the clinic, that I gave in. And then, of course, it turned out she was right. She usually is. What I thought was a mild case of the flu actually turned out to be a pretty major case of the cancer.

What followed was a wild roller coaster of a year. One day I was a ‘normal’ person, going to work, yelling at the TV, mowing the lawns… the next day I was a patient, I was sick, I was hospitalised. Wow, that happened fast. It was like whatever the opposite of winning the lottery is. That sword Damocles I was scared of was banging me on the head constantly. But I took it on myself to take what could have been considered bad luck and trying to get as much as I can out of it.

I can imagine for some people there is a very real fear, that would flavour the way they see the world.

I learned about cancer, and its impact on the middle age male body. More surprising though, was the fact that the cure is way more impactful than the disease. Chemotherapy – particularly after 12 rounds – has some pretty severe impacts, not the least of which are chronic hiccups. Yes, I was as surprised as you were, but chemo hiccups are seismic, and only beaten by the truly horrific chemo flatulence. I’ll bet you didn’t know there is actually a support group for chemotherapy sufferers with wallpaper-peeling gas issues, but there is, and it had a new member.

Cancer is the gift that keeps on taking. For me, it took all my effort to keep a positive mindset with weeks and weeks of hospital stays. To make the time go by quicker, I turned my enforced hospital stays into week-long vacations in exotic destinations. You might have seen me in a hospital ward, but in my mind I was in exotic Fiji, with the palm trees swaying in the warm breeze (Trust me, it was the breeze making them sway – nothing to do with my flatulence).

The roller-coaster that is cancer went up, and down. It nearly went subterranean at one point when the doctor told me that the tumours had come back for a third time. They were now out of treatment options for me and – bonus extra news! I now had less than a year to live.

Boy that will ruin your Fiji vacation. 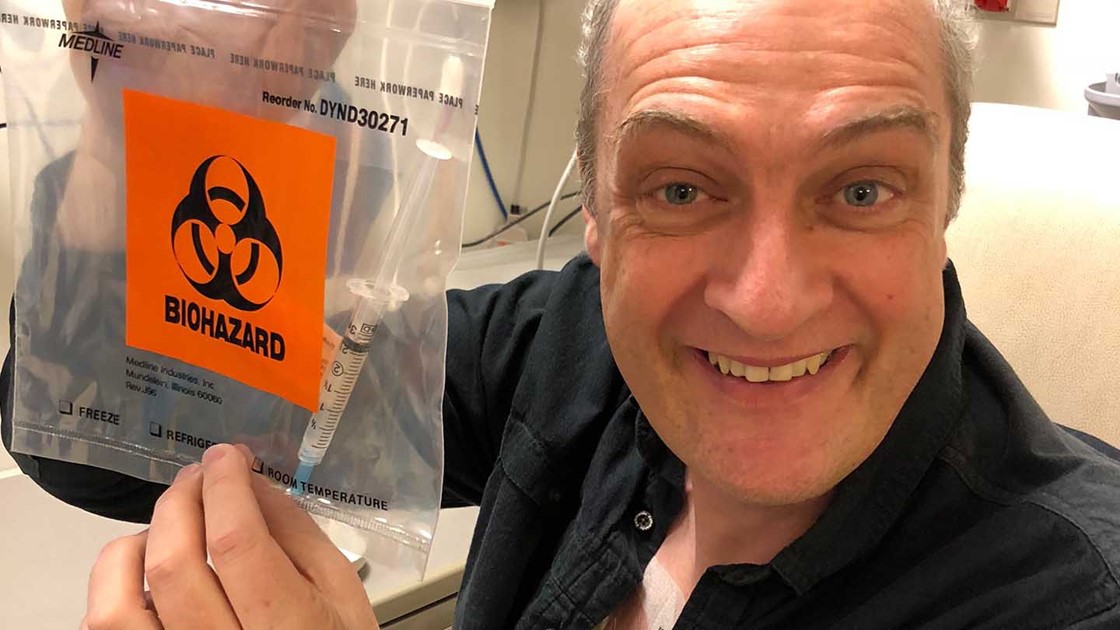 But like anyone given only a year to live, I swung straight into action – and bought a lounge suite on 2 years interest free terms. Ha! I will show cancer. Plus I also scoured the world and found myself another option. Yet again the roller coaster rolled on, and soon I found myself 12,000 miles from home, in the frozen tundra that is Boston in the winter, undergoing a clinical trial.

Ultimately, as you’ve surmised, I had a happy ending. The experimental CAR-T cell therapy genetically modified my blood to fight cancer, and now I am in complete remission.  I’m 6 months into remission – still getting regular checks – but things are going well for me.

Apart from that bloody sword.

Is the cancer gone for good? Well, we will really only know that in a couple of years. I have to keep getting tested regularly for the next couple of years to see if the CAR-T cells are still in my body, and if the cancer stays in remission. Like every former cancer patient I know, I will have to live with the possibility of it returning.

The past two years have been an amazing journey and an amazing year – in a funny way, one of the best of my life.

It’s hard not to think about the cancer returning whenever I get a twinge in the same spot, or feel a bit breathless. I can imagine for some people there is a very real fear, that would flavour the way they see the world. My attitude is that I’ve been so incredibly lucky to get the chance I have had to fight the cancer, and to beat it, that to then live in constant worry would seem to waste the amazing opportunity I have been given to live my life fully. If you win Lotto, you shouldn’t be in fear that someone is going to steal it from you – you should spend and invest it wisely.

I’ve spent the time since finding out I am in remission by making up for lost time. My wife made me count up the ‘extra things’ I had taken on the other day and it totalled 14 different projects or initiatives I am involved with, including a fair amount of public speaking about my journey. Possibly I have over-corrected after a year of hospitalisation…

The one I am most excited about is around helping bring the same life-saving CAR-T cell therapy I had to go to the other side of the world for, to my home country New Zealand. When I returned from Boston, I was contacted by a Wellington-based organisation called the Malaghan Institute. They are a medical research company doing work in, among other things, CAR-T cell therapy! Yes, right here on our doorstep in NZ are experts aiming to do the same treatment I had to go to the other side of the world to get. They will be doing a similar clinical trial of their technology soon (months or a year away) – but they need help. They are a private research institute, set up by an endowment and funded mainly through donations and philanthropy. When I met them, I was so blown away that I committed to helping them raise $1 million to fund their research. Proceeds from my talks go to that fund, and so will other activities. If you want to know more, head to www.car-t.nz.

The past two years have been an amazing journey and an amazing year – in a funny way, one of the best of my life. I’ve learned so much about myself and about the generosity of others. It’s reaffirmed my outlook on life and my optimism for the future. I know that not everyone has the opportunities I had or the good fortune I did, and I feel for them. Accelerating the progress of science with causes like the Malaghan Institute’s work will ultimately benefit many and open up the opportunity for the same life-saving treatment I had, but right here in New Zealand.