NZ has 209 Paralympians. An elite club when you consider there over 14,000 people have climbed Everest, more than 1000 All Blacks and 518 NZ Olympians.

On Wednesday night, Paralympics New Zealand launched their Celebration Project, where the first of New Zealand’s 209 Paralympians to be recognised, gathered to celebrate their contributions to the Paralympic movement in New Zealand.

It was an honour myself to be one of the 19 Paralympian's receiving my official number pin and certificate. The celebration project consists of 12 community events over the next year in the lead up to Tokyo 2020 Paralympics and will recognise the 209 athletes that have competed at a Paralympic Games under the New Zealand Flag.

This is the first time New Zealand Paralympians have been officially recognised with their numbers since New Zealand began competing at the Paralympic Games over 50 years ago. 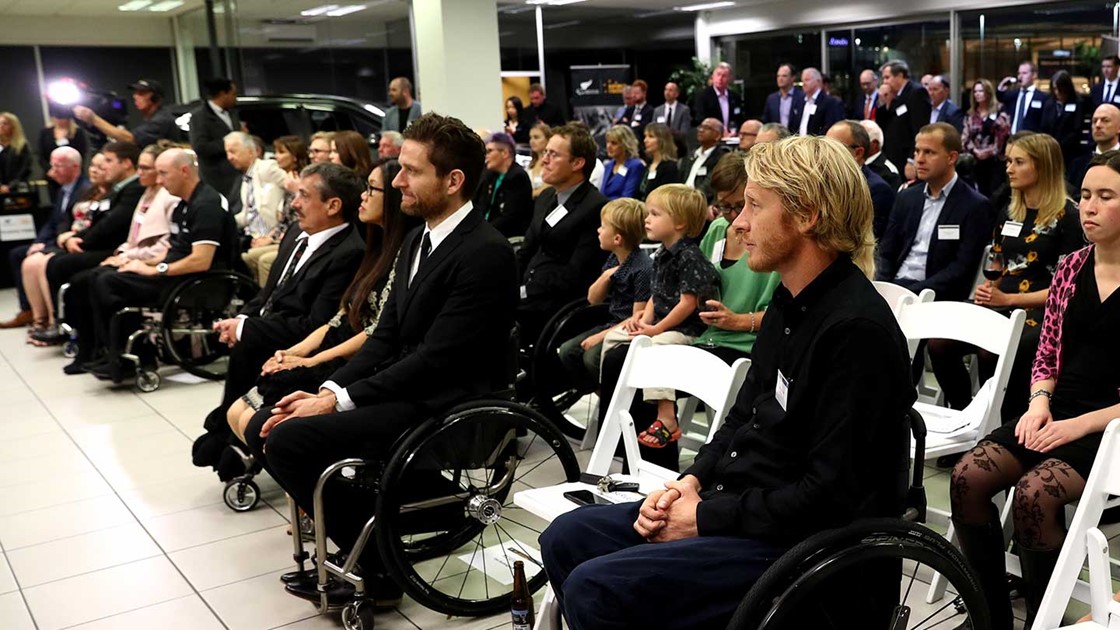 The event was intimate, 19 Paralympians accompanied by family, friends and supporters mixing and mingling with each other, sharing stories from past games and reminiscing over precious memorabilia each had brought along.

Fiona Allan, Chief Executive of Paralympics New Zealand acknowledged the significance of the celebration project and how special it was to have so much history and success of New Zealand Para sport in one room.

“In 2017 as we neared our 50th anniversary as the National Paralympic Committee of New Zealand it became evident that we were at risk of losing valuable Paralympic history and stories. We have long wished to acknowledge our Paralympians, unearth and share their wonderful stories by celebrating their achievements and ensuring they receive their official Paralympic number” She said. 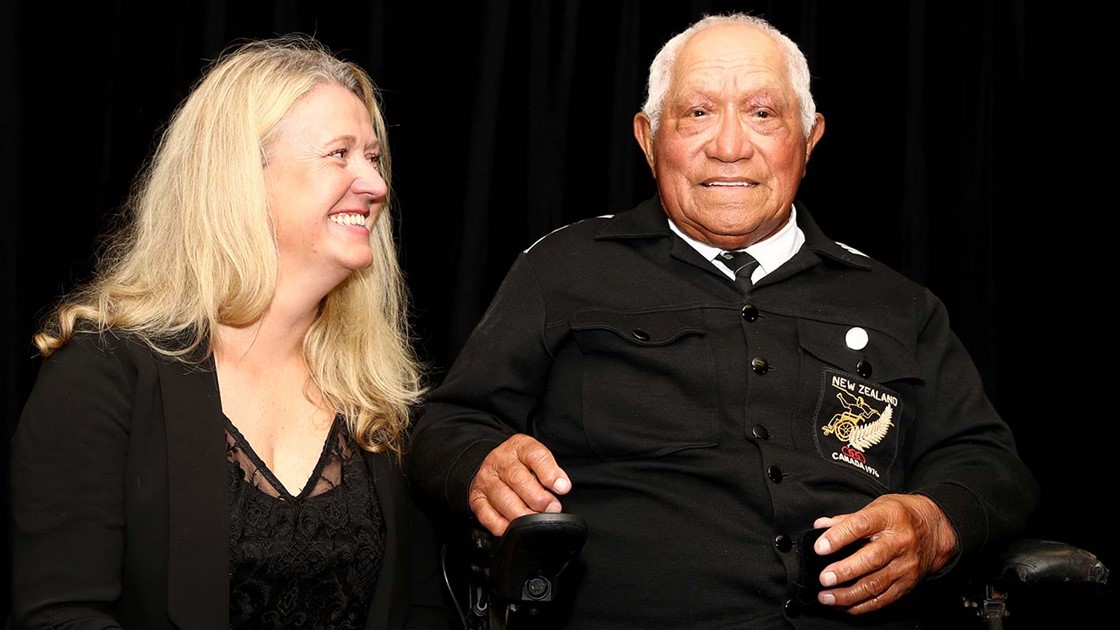 The first to be recognised was New Zealand Paralympian number 10, Reuben Ngata who was part of the very first New Zealand Paralympic Team in Tel Aviv 1968. I watched as he sat proudly on the stage with tears welling in his eyes. After 51 years he was finally being celebrated for his achievement of becoming one of our first Paralympians.

I sat in awe as I watched the numbers slowly climb, I didn’t know all of the names I was hearing but it was so inspiring to learn about the rich and successful history we have for Para sport in New Zealand, It was very special to watch former teammates and others I had looked up to as a youngster receive their numbers too.

When my turn rolled around, it was almost overwhelming to have my success read out to me while I sat on stage looking out at a room full of smiling and inspired faces. 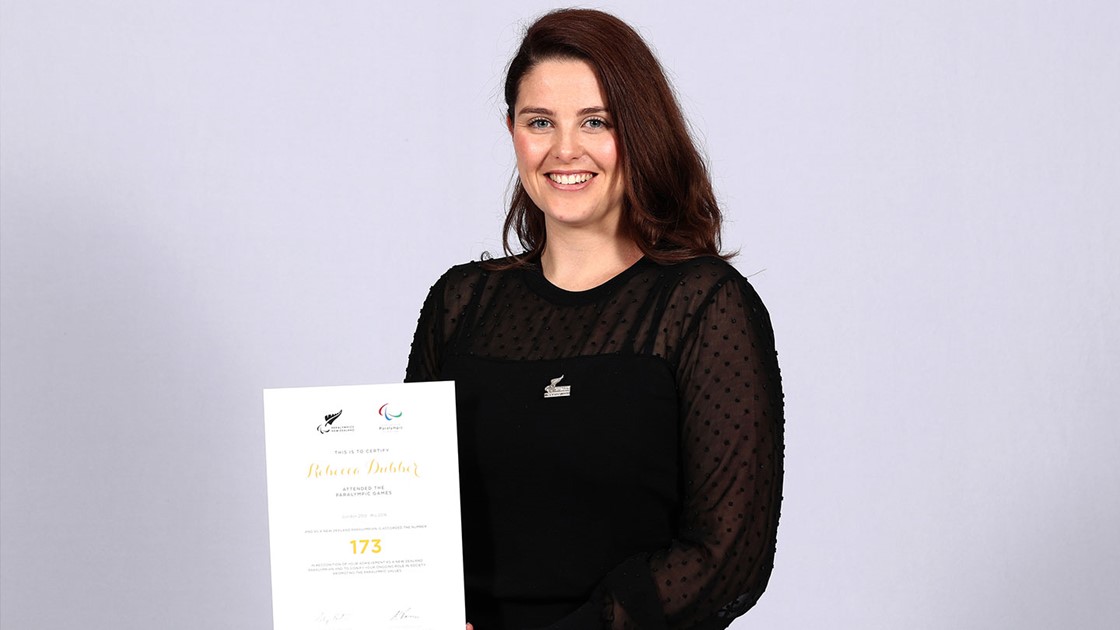 John was a member of the Arnhem 1980 Paralympic Games Team and competed in Para athletics and Para swimming. John then moved to Australia and competed at a further 4 Paralympic Games, this time in gold and green. He recently returned to New Zealand and is now High Performance Para Athletics Throws Coach developing Paralympians of the future.

Chris was part of New Zealand’s first ever medal winning Paralympic Winter Games team at Innsbruck 1984. The team won a combined 5 medals including Chris’s silver in the Men’s Downhill. Chris now works at the Blind Foundation as an Access and Awareness Advisor.

Aaron represented New Zealand at both the Barcelona 1992 and Atlanta 1996 Paralympic Games. He won a silver medal in Para swimming and was 1 of 7 Para swimmers that collectively won a staggering 12 medals in Atlanta.

Evan is well known in New Zealand Para sport for his passion for wheelchair racing. He made his Paralympic debut at Barcelona 1992 where he broke the world record in the 400m along with four others in the semi-finals. Evans passion for Para sport extends to having also played wheelchair tennis and wheelchair basketball.

Two-time Paralympian Cristeen Smith has represented New Zealand at both the Barcelona 1992 and Atlanta 1996 Paralympic Games. At her first games she won a gold medal and set a world record. Cristeen did one better at Atlanta 1996 winning gold and silver. She is still a world record holder in the Women’s Shot Put F53 and Pentathlon P52.

Tim was captain of the highly successful Wheel Blacks wheelchair rugby team. He led the team to bronze and gold over two Paralympic Games. Tim has competed at 3 Paralympic Games – Sydney 2000, Athens 2004 and Beijing 2008.

Dan joined Tim as a member of the gold medal winning Wheel Blacks at the Athens 2004 Paralympic Games. He went onto captain the team in Beijing 2008. Many of you will recognise Dan as one of the presenters and producers that shared the success of the Rio 2016 Paralympics with all Kiwis as part of the TVNZ and Attitude broadcast.

Michael has represented New Zealand at a staggering 4 Paralympic Games as a Shooting Para sport athlete and is aiming to add Tokyo 2020 to the list. He claimed gold in Athens 2004, followed by back-to-back bronze medals at the Beijing 2008 and London 2012 Paralympic Games. Mike is also a coach and loves supporting and developing upcoming Para athletes.

Adam made his Paralympic Games debut at Beijing 2008 as part of the Wheel Blacks team who finished 5th. His passion for the game that is commonly known as murderball due to its physicality, has continued off the court in his role as a committee member of NZ Wheelchair Rugby.

Peter made his Paralympic debut at the Vancouver 2010 Paralympic Winter Games, competing alongside team mate Adam Hall. He competed in Para alpine skiing events including Men’s Slalom and Giant Slalom. Peter raced in a sit ski reaching speeds of over 100km per hour.

Rebecca made her Paralympic debut in London 2012, but it was Rio 2016 that saw her achieve her long held aspiration of winning a Paralympic medal in the Women’s 100m Backstroke. Rebecca retired from Para swimming this year and is now focussing on developing her career in communications.

Para swimmer Daniel was a member of the New Zealand Paralympic Team at the London 2012 Paralympic Games setting an Oceania record in his favoured event, the Men’s 400m Freestyle. He then went on to try his hand at Para cycling in 2014. Daniel is a strong advocate for the visually impaired community through his work with the Blind Foundation.

Aine made her Paralympic debut at the London 2012 Paralympic Games. She was one of 8 Para swimmers that collectively won 12 medals, an outstanding achievement. Outside of the pool Aine is a highly respected musician, writer and advocate.

London 2012 was where Chris made his Paralympic Games debut. As a Para cyclist he competed in both road and track events producing great results. Chris has a strong sporting background having been involved in a number of sports playing representative badminton and soccer in the past.

At just 15 years of age Tupou made her Paralympic debut in fantastic style placing 7th in the Women’s 100m Backstroke at Rio 2016. This year she set a new world record at the World Para Swimming Meet in Melbourne. Tupou now has her sights firmly set on selection for the Tokyo 2020 Paralympic Games.

Jesse competed in his first Paralympic Games at the Rio 2016 Paralympics. He swam outstanding personal best times and experienced the thrill of a Paralympic final. Jesse has also competed as a representative Wheelchair basketball player. With less than 16 months to go Jesse is now focused on preparation and selection for the Tokyo 2020 Paralympic Games.